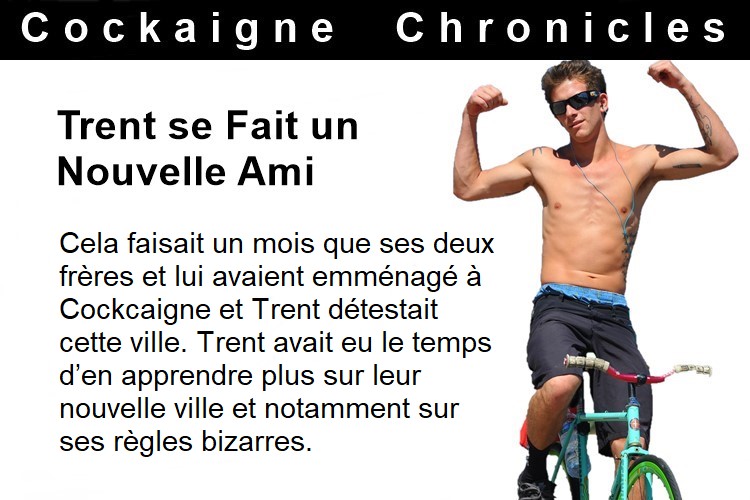 The town of Cockaigne is certainly firing up your imaginations and none more than Firefish who has sent me his tale of a young boy called Trent who meets Adam when out walking Luke in a collar and lead.

Firefish wrote his instalment in French and with a little help from an online translation tool, I managed to convert it into English.

I will be posting both versions very soon, so please enjoy the original French version or an English translation.

If you want to contact them, then just email me, and I’ll forward it on. I’m sure he would also love to hear from any francophone readers. Let’s kick off February with another damp underpants installment of ‘Bog Off’ by Tom.

I’ve been going to the gym now for nearly a month, and it was only this week that I saw a man changing into a jockstrap. Before I carry on, just don’t think of me as some kind of gym buddy with a hot body and six-pack, if I do have a six-pack, then it’s very well hidden. I just go to the gym to swim on the pool; a bit of cardio which takes the weight off my aching joints.

There are several things I’ve noticed while in the changing room. Young guys are very bashful. Some would just leave still in their gym kit, those that showered would pull on their underpants with a towel wrapped around their waist. I find it quite amusing.

Then you get the middle-aged guys who whip off their towel and quickly pull up their pants, making sure to point their arse to anyone else in the changing room.

And then you get the old codgers… anything goes with the old guys. They let everything hang out and seem to show no modesty.

This was part of the inspiration for ‘Cockaigne Chronicles’, as I wanted to develop a world where the body was normal and not to be ashamed of. I’ve just found this picture on Twitter and I thought it looked so much like my story, Luke’s Encounter with Security.

Let’s start a bush revival together. Bring out your bush!